It surprises people that know me when they read stuff I write here. They find it strange that I can be so serious. I think that the serious me is the inner part I keep tucked away safe. But then I realize the fun me is  the one I actually enjoy more. I am both, and always have been.

My family reminds me I did silly things as a kid. My high school antics got me voted Class Clown. A good memory from then came from our foreign exchange classmate from Sweden. He told me "Be forever a clown," and I thought that was a good quote to live by. I've made a lot of people laugh, even if they did have to suffer the same stories over and over. I was once asked to be quiet at a comedy club, my heckling was getting more attention than the comedian.

The serious side comes out when I write, but not so often in conversation. I have to be approached by someone with something they want to discuss before I open up. Not just political stuff, I'll talk about that with anyone who wants to go back and forth. Real serious stuff: relationships, religion, etc. That's not something I normally bring up, although I will ask someone if they need to talk when it looks like they're in a bind.

On that note.... let's have some fun! A few music links for your enjoyment, and a LOL picture. 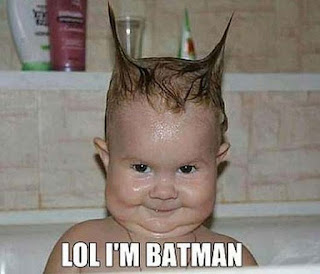 Have a great weekend, we'll be back to the serious business soon enough! :)
Posted by ProudinNC at 8:35 PM No comments:

Richard says to Shimoda, upon their first meeting. In response to "I've been waiting for you." Interesting start for two guys seeing each other in a cornfield, never having met before. Little did Richard know what he was in for, and that he arrived just in time.

They didn't find each other by chance. Three bucks for ten minutes in the air, they hawked biplane rides over bright green fields, over the family farm where Mom waved from the front porch, past town as it were (population 200.) No way did they happen upon the same field at the same time. Richard had things to learn, and Shimoda was indeed a teacher. A Master, it seems. He even came with instructions. The Messiah's Handbook: Reminders For The Advanced Soul. And it was magical. It was destiny.


Who doesn't love a good adventure? Spending time with a new friend, doing something you have in common. Freedom to work as much or as little as you want, eat when you like, sleep half the day even. Having worked hard, we deserve to play hard as well. But even during the downtime, there are things to be learned. Don't forget the sunscreen. Make sure you have a change of clothes, just in case. (My gramma always said clean underwear, but you get the idea.) And always take time to smell the roses. Or the fresh cut grass.

When we take our breaks from life, our moods change. We don't realize we are still learning, it becomes less like work and more like fun. We might just be camping in the backyard with the kids because we can't afford a real vacation, but learning the names of the constellations we see looking in the night sky? That's a double good experience. That quick day trip to the beach seems simple, but when we watch the dolphins play in the surf, and see the gulls at feeding time flying their distinctive patterns based on hierarchy... yep, that was learning too.

The "Sorry, I'm late" is an apology from me, of sorts. I thought I was ready to teach you awhile back, but I found myself lacking. I wasn't quite up to the task, I still had a bit more to learn about myself. I know you've been waiting, even if you didn't know it. Heck, I didn't even realize I was supposed to teach you anything. We seem to be finding out things together. Almost like it's.... destiny.
Posted by ProudinNC at 7:59 PM No comments:

Clinging, I shall die of boredom... 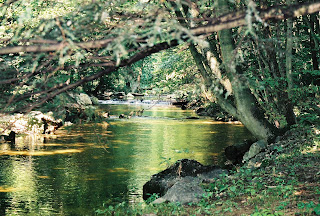 The Master, growing weary of the crowds pressing him, relays a parable in hopes of loosening their devotion. He speaks of creatures living on a riverbed, among the rocks and debris for generations. It's all they know, it's everything they've ever done. One creature reveals that he can no longer bear such an enslaved life. He plans to let go, to trust the river, and take his chances. The chorus against him is loud, but he knows what he must do. "Clinging, I shall die of boredom. I shall let go, and allow the current to take me where it may."

After being bounced and bruised, he floats downriver on his journey. River dwellers who see him from below proclaim him Savior: "see him fly, no one has ever flown!" Despite his reassurance that they too can swim free, they regale his glory above all others. Unreal, he thinks. Don't they see, they're just like me?

One of the lessons Richard learns from Shimoda in Illusions is that we are all masters of our own fate. That the one thing God wants for us is to be happy. He doesn't want us to sit back and let someone else live our lives for us. We must seek out things that give us joy, people that make us laugh. We aren't solitary creatures, we need like minds, like hearts.

Sometimes, if things get quiet, I can hear my heart call out. It wants companionship. It needs friendship. It craves interaction. We need other people. To expand our knowledge, to fulfill our dreams. To complete... ourselves. Without that community we surround ourselves with, we become stagnant. Complacent. Yes, bored.

No one is coming to fix your life. No white knight will ride in to save you. Nobody has a magic wand. It's up to you to make a difference. Unless you're happy with the boredom, you'll have to be the one to step up. You need to learn to let go of the things that made you feel safe. Allow yourself to live. Personal responsibility, remember?

Posted by ProudinNC at 7:10 PM No comments:

Within each of us lies the power of our consent... 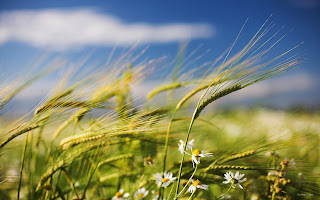 Before Richard begins his adventure with Shimoda, we learn about the Master. That magical being that can heal with the pass of a hand, repair a broken life with a word. An ordinary mechanic, his life flips upside down as people learn of his "powers." No, he really doesn't have any. But convince the mass who gathers to see his miracles. Convince those who throng to his side, hoping beyond hope for a glance upon him, a chance his arm might bump them in the crowd and change their lives forever.

The Master knows that we control our own destiny. He knows their calls of "Messiah" are misplaced. The parables he speaks are meant to show they can rely on inner strength. That they can depend on their own abilities and trust their judgments. No matter how many times he speaks, no matter the message, it falls on silent ears. They call upon him to save them from their misery. And yet again, the Master leaves behind his own life, escaping from those who cannot see the truth: it's up to them to change their lives.

"Within each of us lies the power of our consent... to health and to sickness. To riches and to poverty. To freedom and to slavery. It is we who control these, and no other."

Personal responsibility is a tough thing: it's hard to hold yourself accountable. The hot iron of pride is paired with the stamp of humiliation, and it's hard to wear both. The masks we wear to camouflage the scars rub raw. We silently scratch the wounds and hope nobody notices the imperfection. We worked hard to get where we are today. You didn't ride the winds of change without a saddle, I hope.


Posted by ProudinNC at 8:37 PM No comments: As you know, I'm a big fan of the writer Richard Bach. In particular, Illusions: The Adventures of a Reluctant Messiah. Catchy title, has a good beat, and you can probably even dance to it.

Richard explains in the introduction that people always asked him what he was going to write next, after the huge success of Jonathan Livingston Seagull. He believed he had written everything he had to say, that he had no important words left. I'm not convinced he didn't have a bit of writer's block, and saying he was done was an easy out. After awhile, he realized there's always something more to be written. Maybe he gained a muse: he had met his soulmate Leslie already. In his later book The Bridge Across Forever: A Lovestory, he acknowledges that he didn't see what was in front of him, and possibly that included what he needed to write.

I've been there. I wrote a ton of stuff as a teen: poems and lyrics, mostly. Then I stopped almost completely for a decade. I wrote a few more lyrics in my twenties, and stopped again. Not exactly sure why, but I give myself the excuse that life was busy. When in fact, if I had been writing more, my life might have been less busy. I might have had enough success to be rewarded and work less. I found the internet in the late 90's, and saw how easy writing could be. Under the anonymity of a username, I could discuss subjects that mattered without repercussion. It still wasn't the same, but I enjoyed it. Then there's blogging.

I started a "fun" blog here in 2008, posting smart remarks about politics and linking to articles written by "professionals."  Little did I realize most of them were just living the dream, like me. Only with more talent, and better habits. And of course, I quit again. Took a big break for a few years. I think, in retrospect, I lost my muse. I felt.... ignored. Like I didn't have anything to say that anyone wanted to hear. I'm not entirely sure where "I" went, but I thought I was back in 2014, into 2015. Then... I got lost again.

I think I put too much pressure on myself. I said I believed I was supposed to write to teach people about surviving a life that, in spite of the HUGE amounts of suck, was also full of joy and wonder and happiness. I wrote every. damn. day. for months. Then one day, I.... couldn't think of a thing to say. I hemmed and hawwed for a week, then tapped out. Again.

I've re-read Illusions about five times in the past year. And finally, I found it. I found what I needed to get "me" back. It was there, all the time.

"Our true work is this voyage, this adventure."

I hope you'll come along with the journey. Again.
Posted by ProudinNC at 7:39 PM No comments: 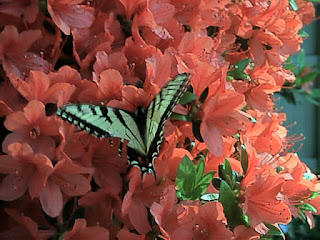 The world awakens from the cold slumber of Winter. She shakes off the chill like a pup after a bath: excited, yet a bit unsure.

Time for me to get back to work. I hope y'all are ready.

Let's do this!
Posted by ProudinNC at 2:43 PM No comments: